One of the biggest retailers of electronics has weekly specials and top deals on catalogues. You can browse here JB Hi-Fi Catalogue to see deals on computers, TVs, sound products, phones, game consoles and games, cameras, fitness equipment, and more categories. The prices of electronics can be really expensive. Catalogues collect the best prices of the week for you and they show big discounts like half prices or 30-40% price drops. Eventually, you are able to reduce the cost of the laptop you have been thinking of buying. Microsoft, Apple, HP, Lenovo, Google, and more brands are usually featured brands and many more are also available. JB Hi-Fi is a store to learn about new technological trends, too.

The catalogues can also show the availability of the recently released DVD movies. Music CDs, movies, console and PC games are usually on sale in catalogues. Home improvement and appliances are people’s favorite sections. If you want to buy a new fridge and looking for a good price, come check out the latest JB Hi-Fi Catalogue in case there is a chance to see a discount. Time to discover JB Hi-Fi Logitech POP Series Sale 2022! If you are tired of standard keyboard designs and want to spice up your working environment a little more, the Logitech POP Keys series is for you. 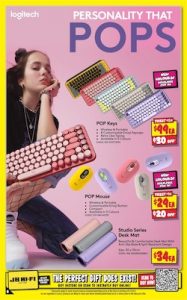 Check out the Logitech POP Keys products. They stand out with their vivid color harmonies with JB Hi-Fi Catalogue. Let’s look at the features of the keyboard, which you will especially love the design of, and the design structure that will be talked about a lot!

When we look at the design in general, we see a compact structure. On the keyboard, where there are no numlock keys, you can easily reach every point. The keyboard and mouse are the new parts of the awesome accessory series. They add color to the work routine, redefine personal workspaces with its retro look that offers three color options.

When we look at the structure of the key caps, we see a structure similar to typewriter keys. The keys are curved inwards. They are ideal and soft for comfortable pressing. When you look at the images, you will see a more oval structure. For more details, you can check out on page 6 of this JB Hi-Fi Weekly Catalogue!

If we look at the layout of the keys, again Logitech POP Keys offers a functional design. The customizable emoji keys on the right, the functional FN keys on the top, the microphone and dictation keys, and the keys that switch between connected devices have a successful key layout.

In the design part, we talked about the emoji keys area. Logitech has also added customized keys that provide fast emoji use to the keyboard. These keys on the far right come as 4 emoji shortcut keys and 1 emoji menu key.

This is the part that I really liked. I like compact keyboards, but it’s usually a very ordinary build. RGB lighting is offered, but it has become commonplace for many keyboards to have this. Logitech POP Keys are a little more out of the ordinary.

Well, if you say that there is no shortcoming in design, there is. The keyboard has no backlight. It could be a fixed led lighting. But the fact that it is a battery-powered model already causes it to stay in the background in this regard.

Here, LED light is used as a point on some keys. There are Caps Lock key, Battery Led indicator, keys to switch between 3 devices, but we can’t say that it is a lighting. It’s more of a status light.

Another striking point for POP Keys is durable for 50 million keystrokes. The keyboard can be connected to 3 different devices at once. It is possible to run it on Windows, Chrome OS, macOS, iOS, iPadOS and Android.

This is where the keys we mentioned in the design part come into play. With these keys, which are considered as Easy Switch, you can instantly switch between devices. I think this is also successful in terms of functionality.

For this, a long usage test is required. But it is said by Logitech that up to 3 years of battery life can be offered. It will vary according to usage, of course, but if the duration is correct, it is an ambitious value.

POP Keys offers two separate connection options. As you can connect wirelessly via Bluetooth, you can also connect via the Logi Bolt USB receiver. It can be preferred according to different uses, but the wireless range is important here. Logitech did not make a distinction and determined the wireless usage distance as 10 meters.

There are 4 different emoji keys that come out of the box. You can customize these keys via Logitech’s own software. You can also use your keycaps according to customization.

JB Hi-Fi Catalogue and Harvey Norman Catalogue are both great deals if you wanna save on some tech devices for school days. The back-to-school bargains at JB Hi-Fi start with deals like a wireless mouse, Vivobook notebook, Logitech stream webcam, and more. You can also save 25% off Chromebook computers. At HN stores, you will find a BYOD deal. You can buy education-ready computers and the store provides unlimited support. Harvey Norman techteam can answer you questions today. Visit hn.com.au/byod today to learn more about this. If you browse these catalogues, you will learn more about Back to School Tech Deals in Jan 2023.

The new bargains can save you a lot. Check out the new deals on Galaxy Tablets. You can find colourful logi keyboard and mouse sets. Lenovo ½ price, Asus intel evo computer and more deals are available in the catalogue. They have BYOD sale with computers ready for education. Use them as you buy them. Even in early education nowadays, laptops, tablets seem to be nearing to be basic needs. They will make accessing information incredibly fast and some classes will/may take place online. 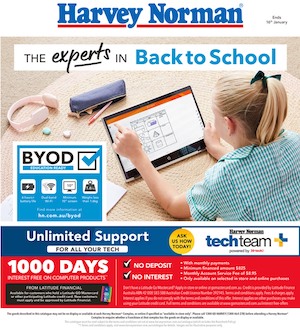 The catalogue doesn’t only have these. You can find gaming laptops, Macbook Pro, iPad Pro, gift cards, back to school photo & card deals, and more in Harvey Norman Catalogue. There are certainly more catalogues which contain school supplies and tech products. Check out catalogueau.com/back-to-school/.

Subscribe to the newsletter of catalogueau.com for more Back to School Tech Deals in Jan and Feb 2023. We’ll send new catalogues to your email.

As we are welcoming a new year, you can browse the top deals from New Year Tech Deals 2022 – 2023. Super deals from Harvey Norman, The Knockout Sale from the Good Guys, BYOD range at Officeworks, and end of year madness at JB Hi-Fi are all interesting offers. You will the essential tech devices and kitchen appliances in these catalogues, too. You can even save 10% off Apple devices. iPhone 14 trade-in are a great chance to save to save on the latest wonder of Apple. If you like to browse catalogues, check out these for your tech needs in January 2022.

Save up to 30% off Windows 11 PCs. Shop Apple devices and buy iPhone 14 with a trade-in deal. Nokia phones, Lenovo tablets, and many more products are available in this catalogue. 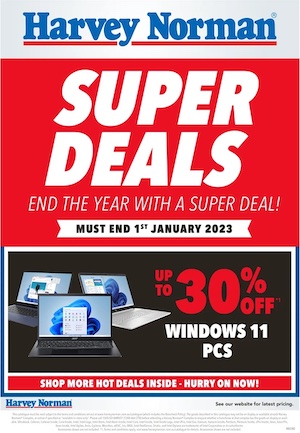 Famous knockout sale is now on. Check out the new deals on TVs, fridges, laptops, popular smartphone brands, and many more products. Appliance Brands like Electrolux, Samsung have great offers in this catalogue. find them in the early parts of the catalogue: 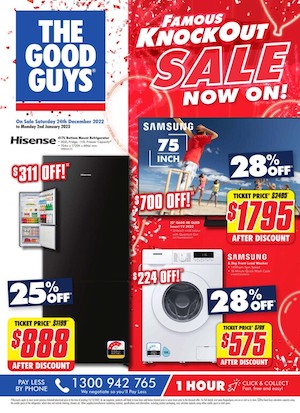 Laptops are on sale at Officeworks. In fact, there are many more office products that can be useful in your daily life. These modern devices will make your life much easier. Check out these deals on Officeworks Catalogue: 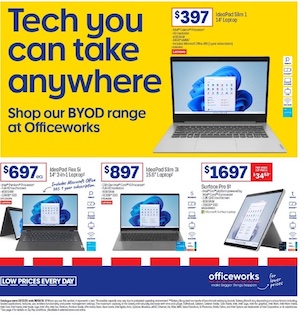 QLED Smart TV, HP Notebooks, Samsung S22, and many more devices are gonna be on sale this week. Check out the new computer deals. 25% off HP, Lenovo, Asus, Dell computers this week. It is one of the most important catalogues of tech this year.